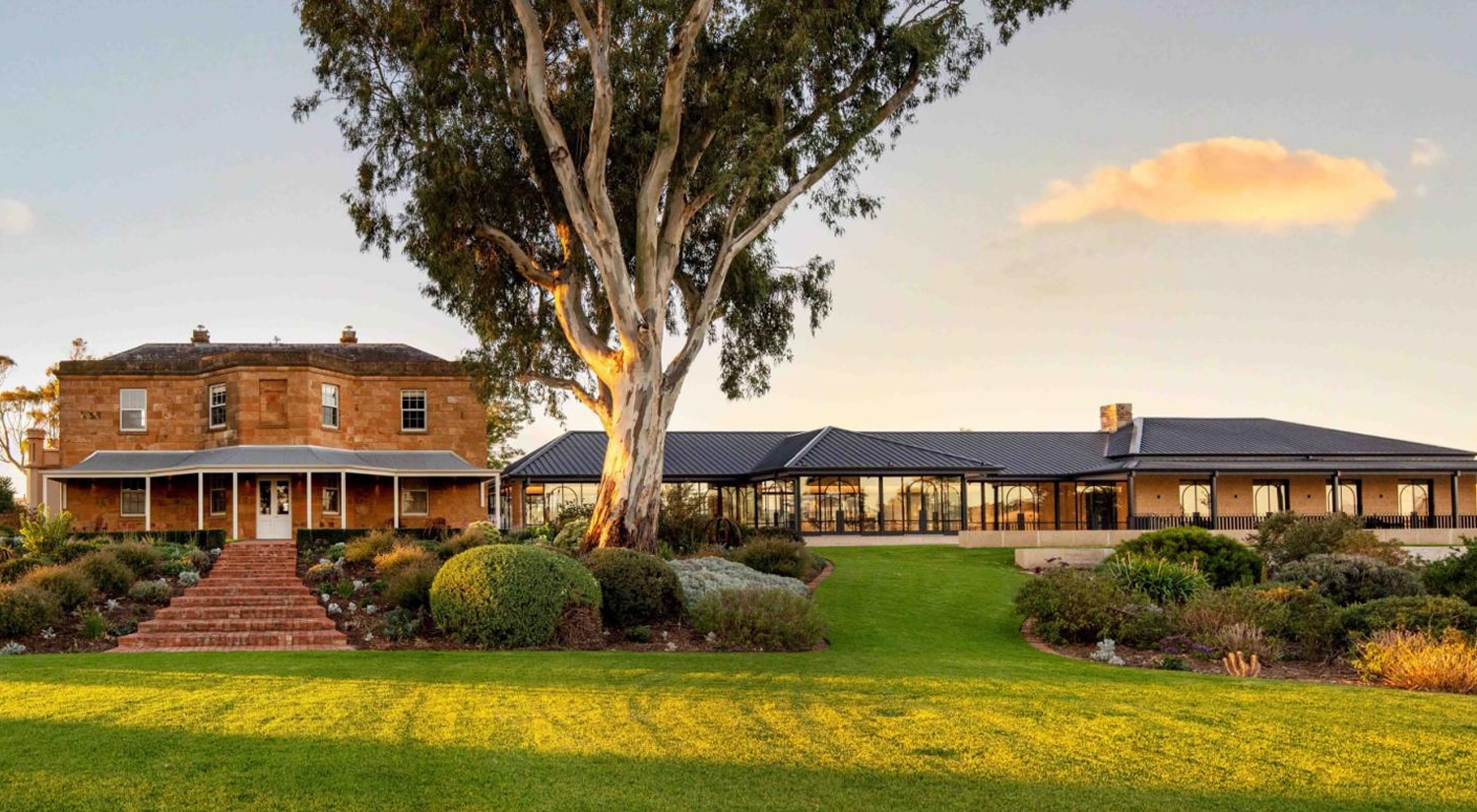 Rural revival in the Barossa

It’s all wine and skittles at this historic homestead, which was once the setting for a popular TV drama. 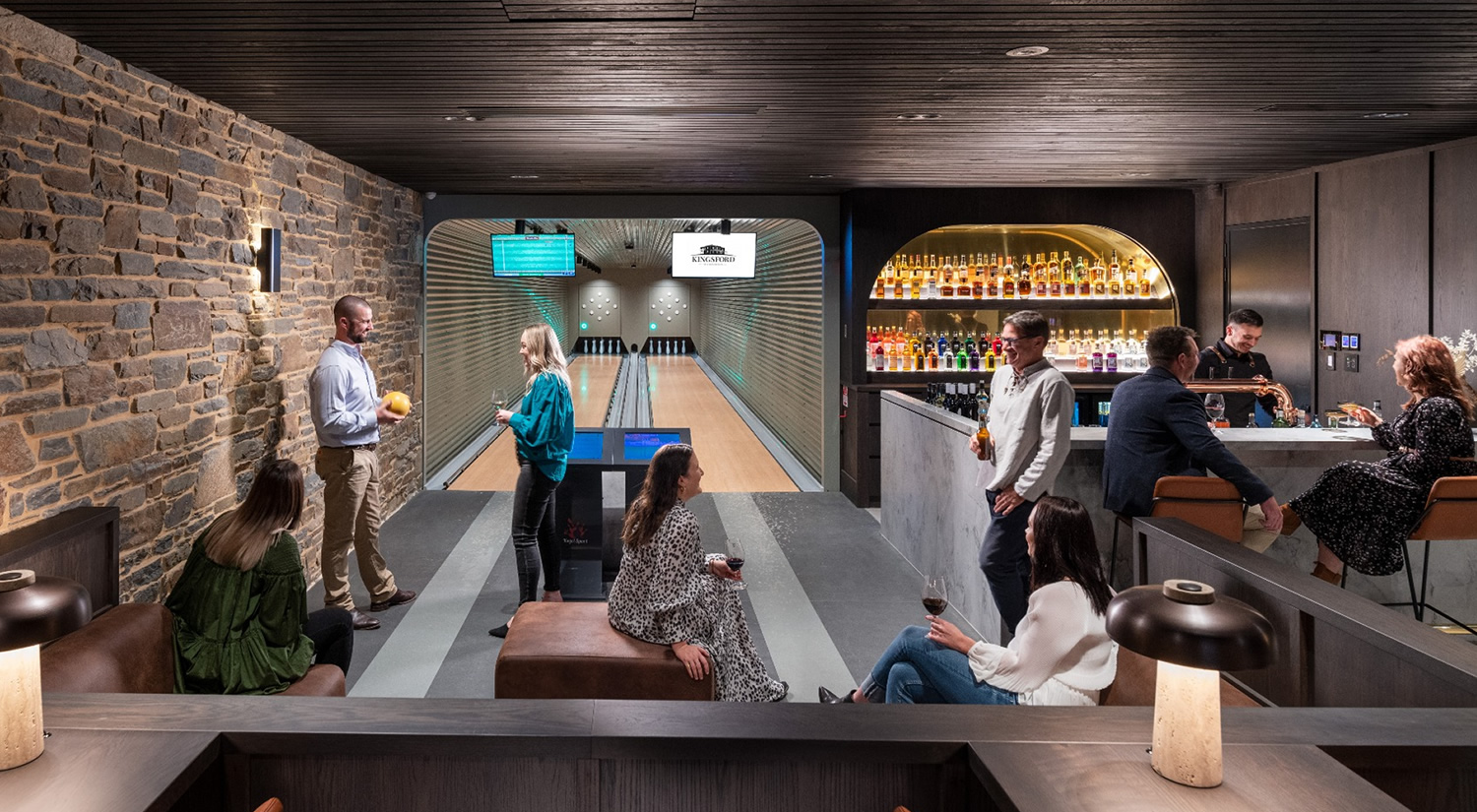 Underground in the Kegelbahn, the hour is late. The skittles are flying, the grenache flowing. It’s a boisterous, uniquely Barossa scene; kegel is a traditional German game of nine-pin bowling brought to the valley in the 19th century. This flash new bowling alley can be found at “Kingsford The Barossa”, recently reopened on the edge of South Australian wine country after a two-year, multimillion-dollar redevelopment by local entrepreneurs Stefan (Stef) and Leanne Ahrens.

Leanne led the interior fit-out of the lodge, drawing inspiration from Kit Kemp’s distinctive Firmdale Hotels in London and New York. She was especially charmed by the stylish 10-pin bowling alley at Ham Yard in London and instantly saw its application in the Barossa.

It’s a place where all sorts of quaint traditions have survived into the 21st century, including brass bands, hotly contested dill cucumber competitions, and the historic Tanunda Kegel Club, where “kids were paid a few cents and a can of Coke to spend the evening resetting pins”, Stef recalls. 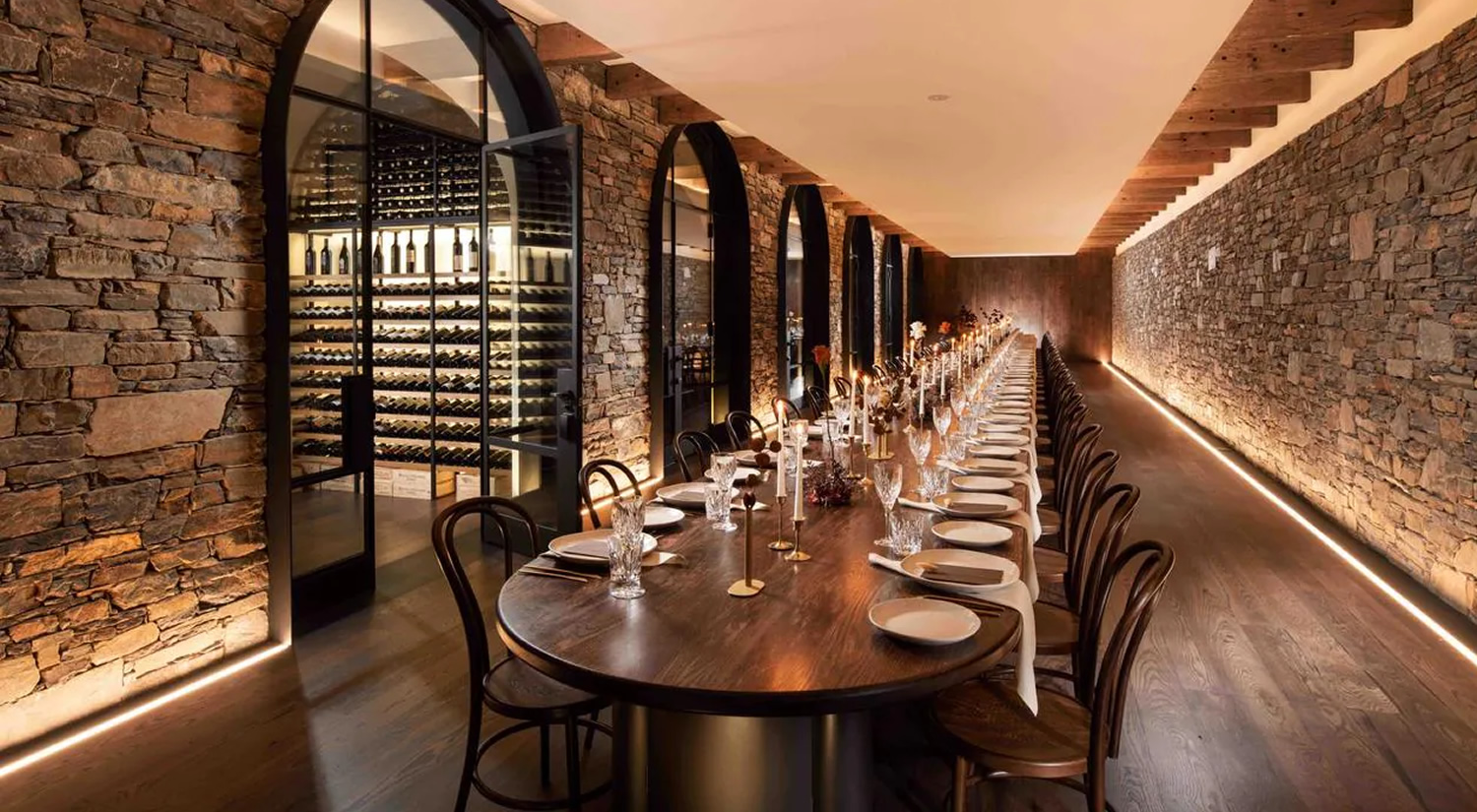 Next door in the impressive Vault, with its 21m-long cellar table, Stef’s wine collection, along with a full vertical of Grange, is amassed in a series of glass-fronted catacombs. It’s all very James Bond. With the press of a code on Stef’s phone, a secret door at the far end of the subterranean room opens, revealing stone stairs connecting to the original cellars beneath the 1856 homestead

Many will recognise the elegant stone mansion from TV show McLeod’s Daughters. The final episode of this rural girl-power saga aired 12 years ago but the series remains hugely popular, especially in Europe, with fans continuing to drop by.

Orleana restaurant at Kingsford The Barossa

As a fifth-generation Barossa descendant, Stef’s connection to Kingsford (aka Drover’s Run) runs far deeper than that of fictional sisters Claire and Tess; he played here as a child and has always loved the dry hills and the secretive, meandering gorge carved by the North Para River. There’s a palpable magic to Kingsford. I remember succumbing to its allure about 25 years ago when I first spied the abandoned house standing proud among long, golden grass and atmosphere-laden stone outbuildings. It was a sleeping beauty, lost to the world, until Channel 9 and the McLeods came along. When filming wrapped, the Aherns purchased the National Trust-listed gem and began by restoring the main house, opening in 2012 with a handful of suites named for previous owners, including Kerry Packer, and property founder, wealthy pastoralist Stephen King. Covid provided the Aherns with the perfect opportunity to take their “passion project” to the next level, transforming King’s lonely outpost into a world-class lodge, helped by craftsmen at their Barossa construction company who painstakingly fashioned the arched metal doors and windows and balustrades.

Matilda suite at Kingsford The Barossa 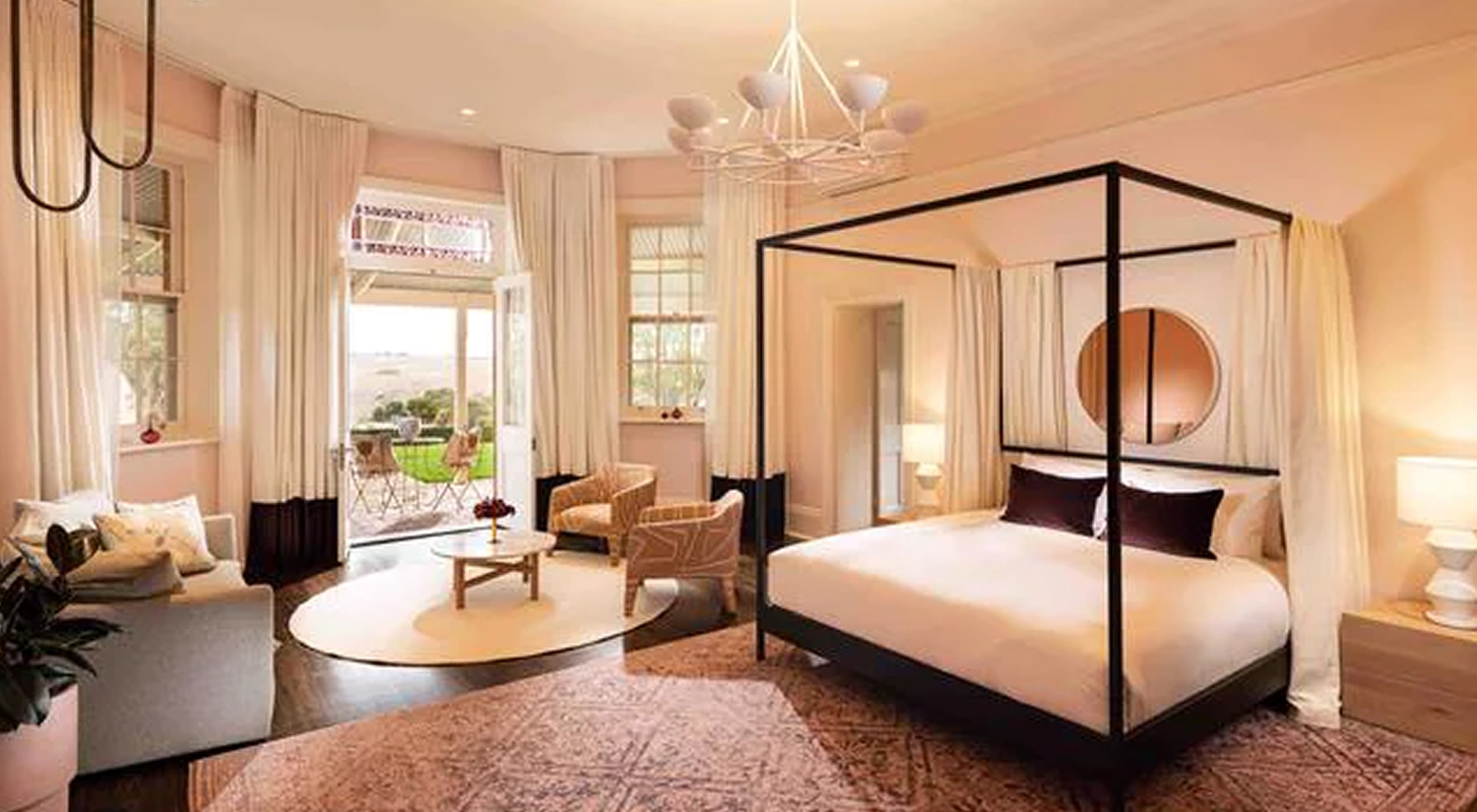 Catering to just 32 guests in 16 suites, Kingsford lies 45 minutes from Adelaide, on the furthest edge of the northern Barossa. Large gates open on to a long drive that winds through the rolling hills of the 91ha property. Recent extensive tree planting includes a long avenue of young red gums leading to the old front door and a curious mock gothic portico. Gardens have been landscaped, with drought-tolerant plants anchoring this whimsical, transplanted English house to a tougher Antipodean terrain.

After good winter rains, the hills are green. Sheep-like shadows move across the landscape, kangaroos graze on the lawn, and the snaking North Para flows strongly, feeding deep pools that remain filled even during the hottest summer.

Intimate dining in the cellar 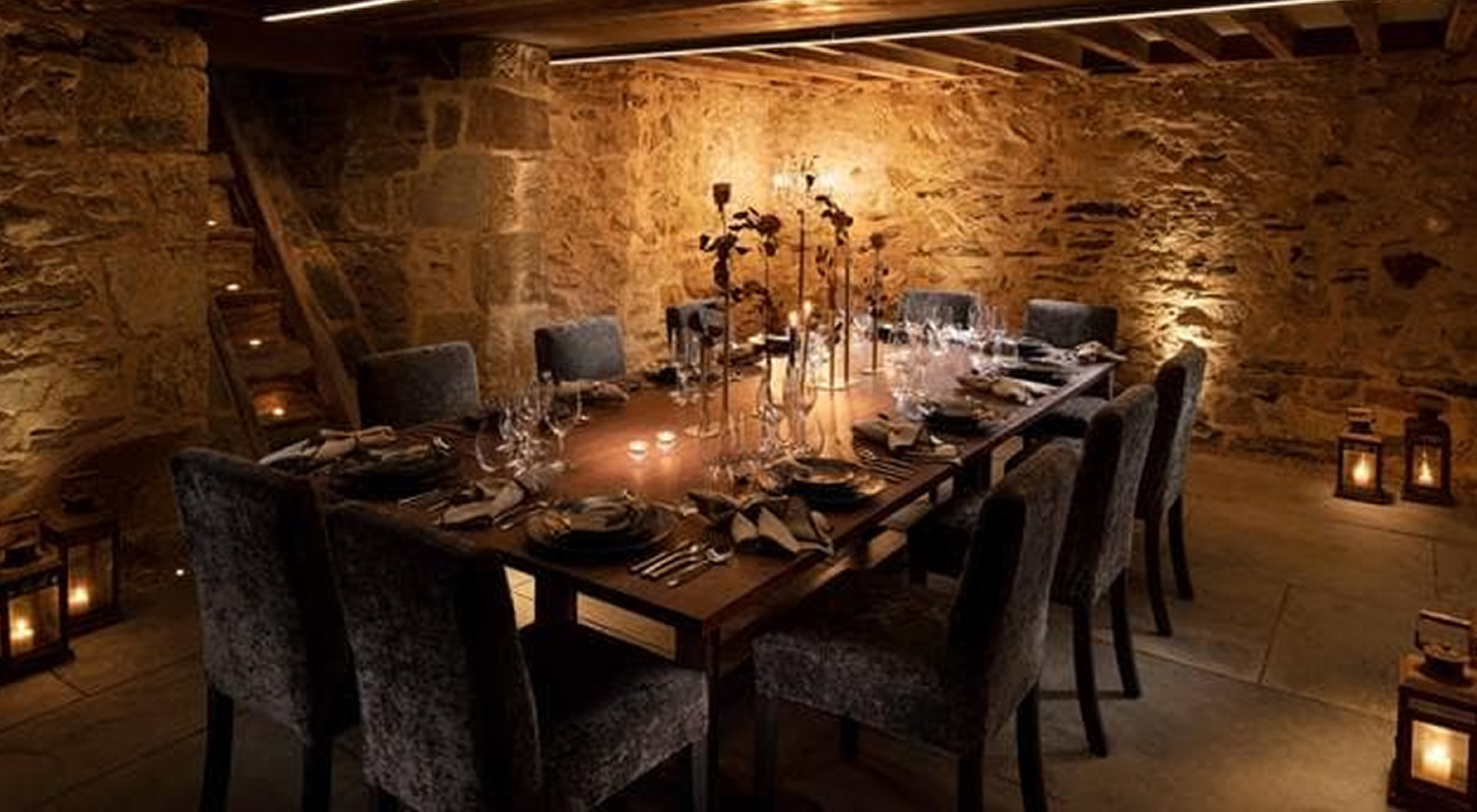 Extensive additions to the property have been cleverly aligned so as not to detract from the pleasure of arriving at the front door of the old house. A new wing has four east-facing suites, each with a private terrace offering rural vistas. These are linked to a lounge with a sinuous marble bar where coffee and drinks are available all day, then a huge glass-walled dining/events space that in turn opens on to the saltwater swimming pool and Peppertree Bar. This European al fresco space is tucked between the old stone walls of the 19th-century garden, with a great open hearth, wood-fired oven and seating.

In the homestead, ground-floor reception rooms have been converted into suites. In my digs, the vast Matilda King Suite, the bathroom is roughly the size of a ballroom, with fireplace and original timber floors. The huge tub is tethered to an island of marble, and the double shower is large enough to host a soiree. I can’t help waltzing about the room while the bath runs, admiring the huge stems of phalaenopsis orchids dotted about the place (the house is awash with lavish flower arrangements). 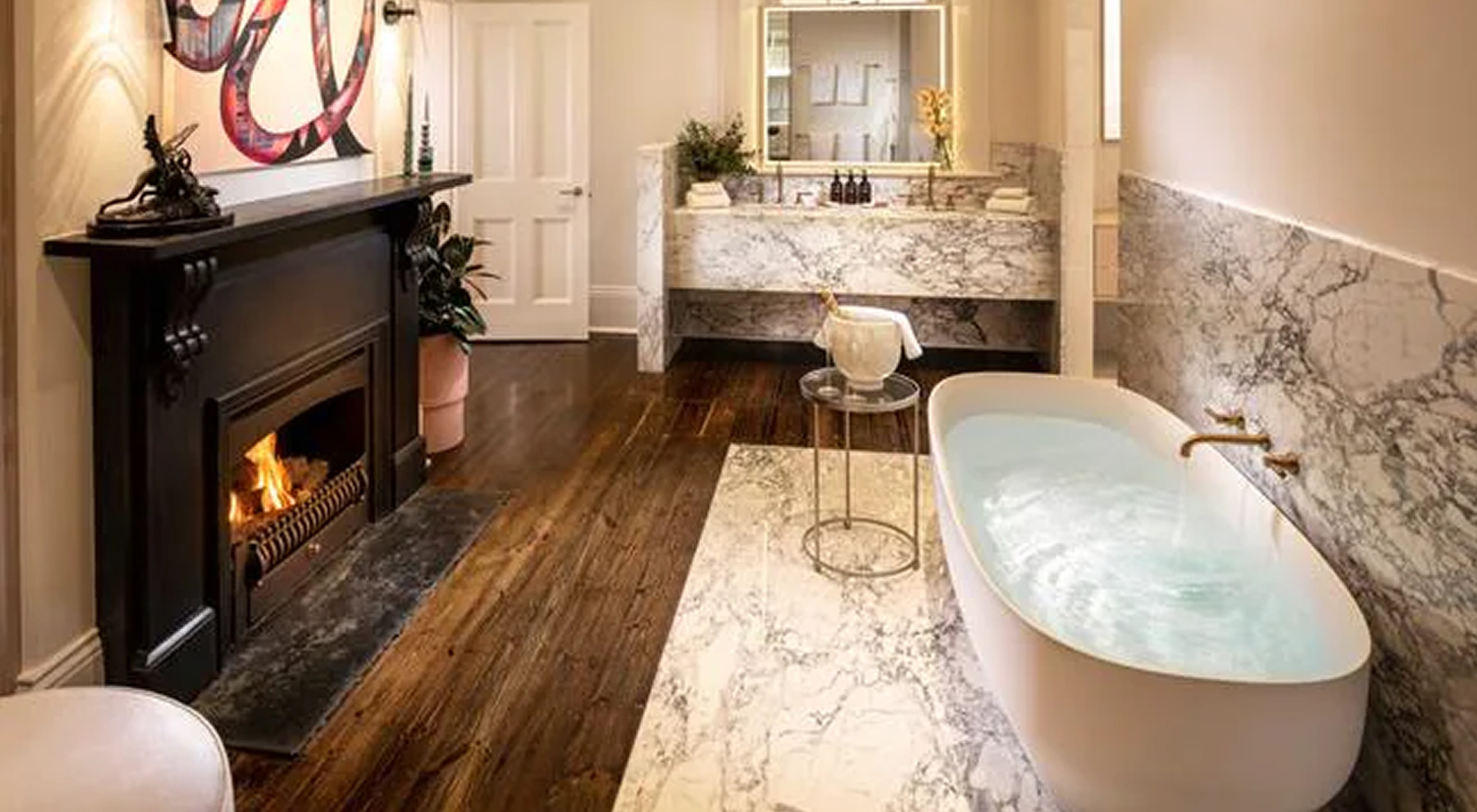 In the bedroom, french doors open on to the old sandstone veranda and beyond to a deep country quiet. I sleep like a top in the comfy, modern four-poster, and in the early morning watch a small mob of kangaroos outside in the garden, a mum with joey in pouch, another little chap just finding his feet, climbing the sandstone steps to nibble on the neatly tended lawn.

Like the other rooms in the old house, the Matilda King Suite combines contemporary furnishings with a soft pastel Regency palette (pale pinks and blues) and artworks by Barossa and South Australian artists. Guestrooms and reception rooms in the new wing are noteworthy for bespoke furniture and fixtures; every detail from the handmade soap dishes to the cupboard handles has been specially commissioned.

The four View Suites in the new wing are Mediterranean in mood, painted soft sage and pink with textured, curved walls and outlooks from the bed over the living area to the terrace (the TV pops up from a contemporary credenza). Fun artworks by Annabel Lapsys, compressed-clay side tables by Adelaide studio Handmade & Found, and chunky sofas from a Melbourne firm are complemented by bathrooms clad in grey Italian marble.

It all makes for a super-smart fit-out that feels perfectly in keeping with the rural Aussie landscape. 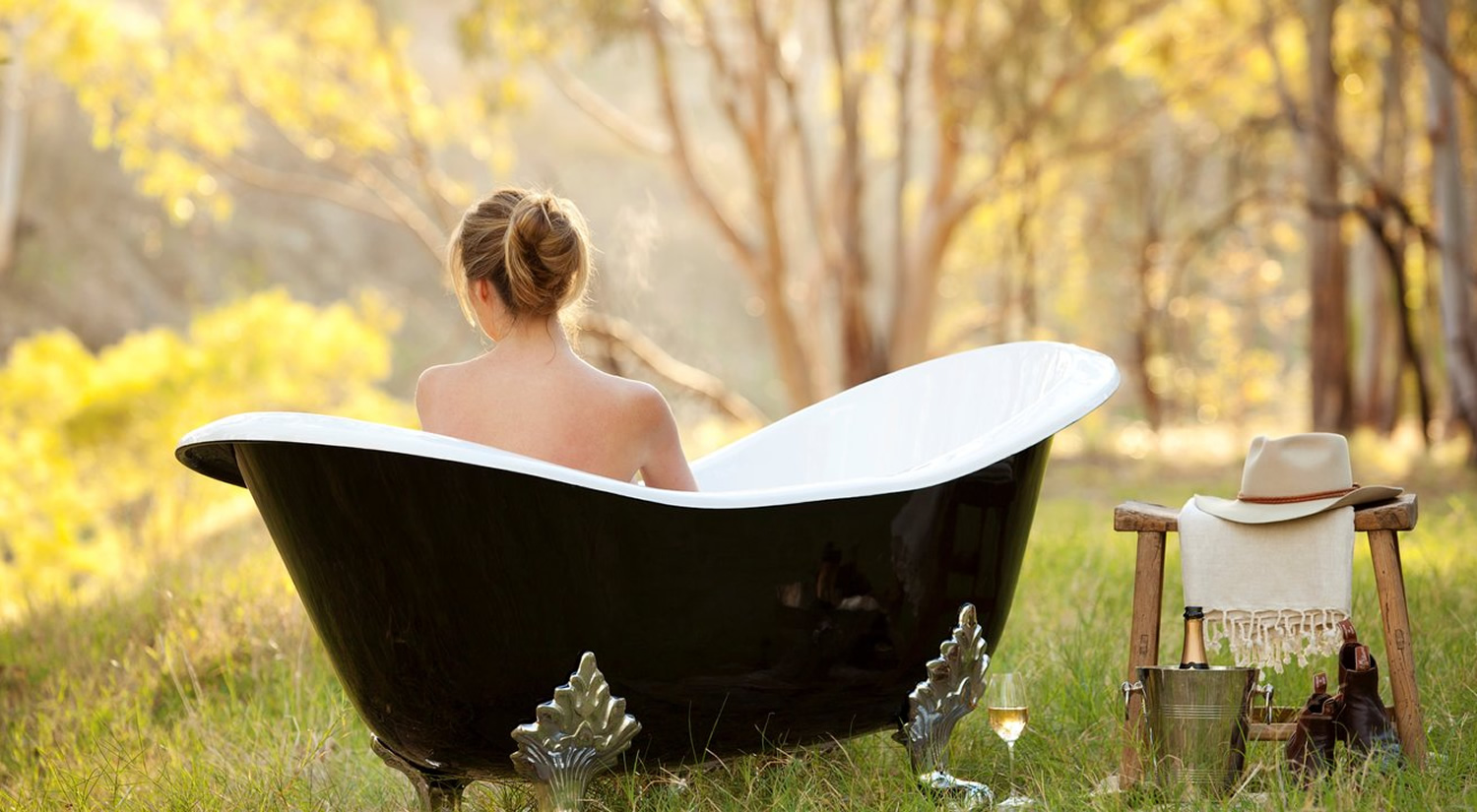 Kingsford’s most alluring room, however, has no walls. The romantic “bush bath” is similar to those found in safari lodges in Africa, but given the lack of potentially disruptive lions and elephants, is located well away from the lodge, perched on a little platform above a secret bend in the river.

With fluffy towels and a bottle of bubbles at the ready, this al fresco tub is the perfect place to appreciate the special Kingsford magic that has bewitched Stef since he was a child and led to the creation of this beguiling lodge.

With 16 suites across the homestead, cottages and lodge, Kingsford The Barossa is accepting group, event and wedding bookings. Leisure guests are welcome Friday and Saturday nights (minimum two-night stay). Suites from $695 a night, twin-share, including cooked country breakfast and gratis non-alcoholic minibar. Share-style and degustation dinners and in-room spa treatments are available.