Jim Watts of Coffs Harbour, NSW has defended his title as Australian Kegel champion following his win in the open division at the Kegel Championships held at Kingsford The Barossa on March 31. Local talent, Lani Sawka and Tom Carmichael were crowned champions of the Ladies’ and Men’s divisions respectively. “I’ve been playing kegel before, but it’s the first time for a competition said Lani Sawka. 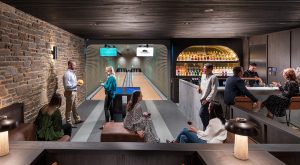 This year was the first time the championships were played outside of Coffs Harbour, making use of the beautifully appointed subterranean KegelBahn at Kingsford. “This year was more like a bit of a trial, but next year we’ll set a date earlier and plan it, and hopefully covid will not restrict things quite as much.

Kegel is a traditional German game that became popular in the Barossa about 160 years ago when the first alley established in Tanunda, Kegel Sport Australia’s Heinz Gress established the first modern kegel alley in Australia at Coffs Harbour, where the championship was always held.

Since then, he has built kegel alleys on Hamilton Island, Melbourne, Sydney and helped the Ahrens create their alley at Kingsford. Mr Gress described the Kingsford alley as the “nicest one” in the country and said such German traditions should be kept alive in the Barossa Valley.

“For some reason, in Australia, they’re so Americanised so they prefer tenpin bowling,” he said.“But kegel is a much better game… there’s about 30 different games you can play; in bowling, there is only one.”

He added the pins were the main difference between kegel and tenpin bowling.“ The pin in the middle is what you call the ‘kingpin’, everyone talks about the kingpin. “It came from kegel, not tenpin bowling. We can make Kegel a major Barossa sporting event.”” Mr Gress said.

The KegelBahn at Kingsford is fully automated, with 20 different variations of games available to be played, including international rules and novelty games for children.

But the best part about Kegel, according to Stefan and Heinz is the social game. “What I like about it is you can sit here and have a beer and have a bit of fun. It certainly is a lifestyle sport,” said Stefan.

“For us, as a Baron for the Barossa and our charter in that is to uphold the cultural roots of the Barossa and promote the food and wine,” Mr Ahrens said. “You need to understand your history to know where you’re going ahead as well and I look at the solid foundations my parents set for me, and that set me up for life.”

Kegel champion Jim Watts, who was also bowling at the championship last week, said he was always a tenpin bowler, but got into kegel when he met Mr Gress in Coffs Harbour almost a decade ago.

“I had a couple bowls and fell flat on my face, but I got into it and Heinz said ‘do you want to join the league?’ and I did. That was in 2013,” Mr Watts said. “I bowled my first championships in 2013 and I’ve won them ever since (representing Coffs Harbour).

Mr Watts now works with Mr Gress to help him set up alleys across the country, but said the Kingsford facilities were superior to most.“ The facility is beautiful,” he said.